As a teenager in Baton Rouge, LA -- in the mid 1960‘s -- our family was a little out of the church-going habit for awhile.  A friend kept trying to get me to go to her church.  She could talk very enthusiastically about Jesus and salvation and things like that.  My parents weren’t all that big on us going to church. But one day, I got into some serious trouble at home when I tried out a word that my friend used freely -- an “n” word referring to people who, at that time, were not welcome by the people who lived in our all-white neighborhood to go to our all-white school.  Indeed, another friend justified her family's objection to integrated schools because they "knew" that it was a scientific fact that "Negroes are not fully human."
At about the same time, a white Southern Baptist pastor -- a kind and courageous man I would meet a few years later in Dallas TX -- was being ostracized by Istrouma Baptist Church in Baton Rouge because his congregation did not want to have as their pastor someone who was involved in the Civil Rights movement.  This pastor wouldn’t be quiet about liberty and justice for all from the pulpit.*

These are business as usual stories. Nothing unusual here. In the 60’s it was dangerous to your job to speak up for racial equality, and it was normal for churches and church people to say that God and the Bible blessed segregation and endorsed white supremacy.  None of this is news.

It is also not news that, in most white communities and white congregations, MLK day is "celebrated" by a few congregations. They have some idea that King was a good man, and that celebrating him somehow relates to faith, so it's is a good idea. I guess they have not been personally inspired by King's message and courageous actions and his inspiring legacy. They have not been justice-deprived or bound by laws and traditions that benefit other people and ask them to wait for their turn.  How can they celebrate King well when they have no idea what there truly is to celebrate?

Yesterday, business as usual came to a blessed end for me.  In the 60th year of my life -- and in the 20th year of my ordination -- I finally got to spend Martin Luther King Sunday yesterday in a congregation truly celebrating the words and work of Dr. King.  A group of people -- black and white -- began our worship service with a spoken prelude of King's prophetic words.  The choir processed in with all of us singing "Lift Every Voice" and it was magnificent.  A young black woman, dressed in colorful cloth, read her chosen excerpt from King's "Letter From a Birmingham Jail" as part of the children's time, and the little children were silently attentive. In word and song and prayer, we celebrated King, we celebrated Jesus' gift of bread and cup, and we celebrated The Beloved Community. 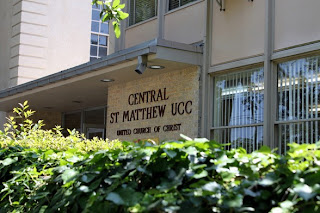 In the congregation were parents who, back in the day, struggled to explain to their children why they couldn't take them to City Park in New Orleans because they wouldn't be allowed to ride the little train.  Yesterday, they could celebrate because, today, their grandchildren are just some of the kids on the train.

In the worshipping community yesterday were gay couples who had given up on church until they found this one. Here, they can be out and proud in our congregation. They can serve here and not be afraid that the sermon will sneak a bite of them.  Now, in some states, they can be legally married.

And there was me -- their very-blessed interim pastor -- whose American Baptist seminary hadn't minded receiving tuition money from women earning their M.Div. degree there.  However, when she and the other recently-graduated women received only rejection letters from ABC churches, the seminary said that there was nothing they could do about so many congregations who just weren't ready to call female pastors.

And so there we were. Together.  Celebrating because we had a lot to celebrate.  It's not quite the Promised Land -- not yet.  But it was a really fine and generous glimpse.  Thanks be to God!

[ * Bruce Lowe continued to advocate for equality for all.  That Dallas church where we met, Royal Lane Baptist Church recently honored 97 year old Bruce and his spouse, Anna Marie, for their dedication to creating a place at the table for everyone.]
Posted by Sharon at 11:25 AM 4 comments:

Things I Write About

This work is licensed under a Creative Commons Attribution-Noncommercial-No Derivative Works 3.0 License.